Don Peebles, Founder, Chairman & CEO of The Peebles Corporation in an interview with Maria Bartiromo on Fox Business channel’s “Mornings with Maria” discussed the trends in the Manhattan real estate market and the potential implications for residents, developers, legislators and investors in the next few years of the looming GOP Tax Reform Bill plans to eliminate state and local tax (SALT) deductions.

Commenting on the potential cap on SALT at $10,000, Don commented, “Some 40,000 New Yorkers currently carry 45% of the tax burden out of a total population of 8.5 million.  The City therefore will need more taxpayers, yet New York lost 120,000 tax payers last year. I see a likely 10% decline in the value of luxury housing in New York City as the City has increasing over-capacity at a time when the wealthy are reducing erosion of their wealth”. Note, the prediction of a 10% drop is based upon the republican tax plan being implemented with the cap of $10K on SALT.

Peebles also sees a trend by which wealthier residents are relocating to low or zero tax states to protect their wealth – echoed by a recent Goldman Sachs report which projected some 2-4% of the City’s 40,000 key taxpayers likely to relocate during the next year.

Recognized as one of the most successful entrepreneurs in the nation, R. Donahue (Don) Peebles is Founder, Chairman, and CEO of The Peebles Corporation, one of the country’s few national privately held real estate investment and development companies with portfolio of projects in New York, Washington, D.C., Philadelphia, Boston, Miami Beach, and Charlotte, North Carolina. Mr. Peebles also is a top-selling author of The Peebles Principles and The Peebles Path to Real Estate Wealth. He a regular guest on CNN, CNBC, and FOX Business Network, as well as a highly sought-after speaker.

Mr. Peebles is an avid supporter of mentoring to expose youth to the value of entrepreneurship. He is the former Chairman of the Board of the Congressional Black Caucus, is on the Board of Directors of the YMCA of Greater New York, was a two-time former member of President Barack Obama’s National Finance Committee, and former Chairman of the Greater Miami Convention and Visitors Bureau. 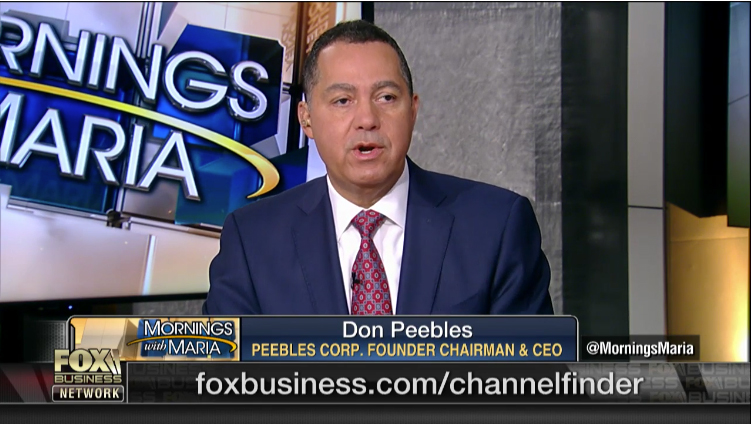